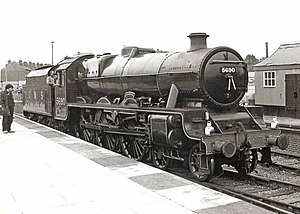 Leander as an SVR locomotive in 1984 (Geograph)

Leander is an LMS 4-6-0 Jubilee class locomotive, designed by Sir William Stanier. The Jubilee class was an update of the LMS Fowler 3-cylinder Patriot or ‘Baby Scot’ design of 1930, incorporating a Stanier/Swindon design of tapered boiler and modified cylinders. Jubilees were mainly used on ‘second division’ express passenger services, and were rated as 5XP by BR following nationalisation.

As of 2019[update] Leander is owned by the Beet family, and operated on the main line by West Coast Railways.

Leander first arrived on the SVR in August 1980 for a boiler repair / overhaul to main line standard, following which the locomotive left in late 1981. During this time good working relations were established between the owners/support crew and SVR staff, so when the owners put the engine up for sale in November 1983, she was acquired by SVR(H). The purchase included sister engine 45699 Galatea, then regarded as a source of spare parts for Leander, and part of the deal also involved the sale of Ivatt 2MT 46443 in exchange.

Leander was ‘on tour’ on the main line at the time of purchase, on 18 February 1984 hauling the Steam Locomotive Operators Association's 'Welsh Marches Express' leg from Hereford - Abergavenny - Maindee North Jn - Newport. [1] She first returned to the SVR as a ‘home’ engine on 20 February. The locomotive worked until winter 1989, and was then stored awaiting a major overhaul.

In winter of 1994 the SVR(H) Board announced the sale of 45690 Leander to the family of Dr. Peter Beet (and of 45699 Galatea to another unnamed purchaser). The justification given was that the offer was attractive, the locomotive had been stored out of use for 5 years, funds were not available for a General Repair, and once repaired the locomotive would see limited use on the SVR due to its size and axle loading. Predictably many members complained of the Railway ‘selling the family silver’.

Leander returned to the SVR for the Autumn Steam Gala of 2010, which celebrated the 40th anniversary of the SVR’s official opening.