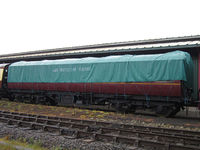 LMS Inspection Saloon 45048 was built at Wolverton in 1940. It was purchased for preservation in 1981, initially at Steamport (Southport) before moving to the Gloucester Warwickshire Steam Railway in 1983. Following a lengthy restoration it carried HRH The Princess Royal to open the GWSR’s Cheltenham Racecourse Station. It was withdrawn from service suffering from water ingress via a leaky roof, and offered for sale in 2012. It was acquired by an SVR member and moved to the SVR in 2013. As of May 2015 it is stored alongside Kidderminster Carriage Shed awaiting restoration at the owner’s expense.