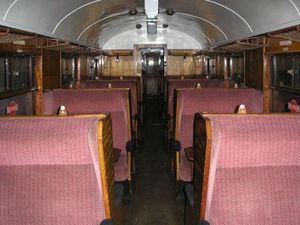 The SVR has three examples of the LMS Third Open (TO), which was designed by Sir William Stanier. Building of this class began in 1938, but the Second Word War delayed the production of later batches. The LMS Open Third carriage seats 56 passengers at tables either side of a central aisle.

It is now owned by SVR(H) and forms part of the LMS Maroon set (Set L).