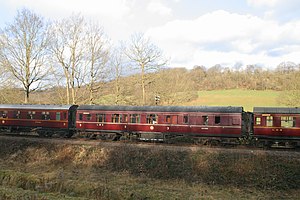 LMS Brake Third Corridor (BTK) 26880 is an example of the port-hole stock designed by Stanier before the War but implemented by his successors C E Fairburn and H G Ivatt. It was built in 1951 by BR at Wolverton as lot number 1506 to diagram number 2161. Unlike the Corridor Composite version, the Brake Third Corridor continued the use of timber framing with steel top, bottom and corner members. The livery when new in service was BR Crimson and Cream.

26986 arrived on the SVR from Worcester in September 1971, having been privately purchased. After refurbishment, it was one of the three SVR carriages which attended the Rail 150 celebrations at Shildon in 1975, travelling there behind 48233 and 43106. It is the only one of the three carriages still based at the SVR.

26986 forms part of Set L, the LMS Maroon set, notwithstanding that it was not built until after nationalisation.