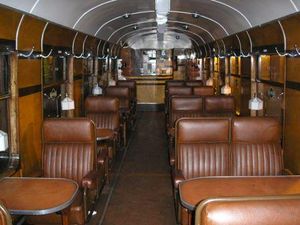 After service with the LMSLondon Midland & Scottish Railway and BRBritish Rail or British Railways, 7511 and 9355 were acquired by Gilt Edge Carpets (formerly Carpet Trades Limited) of Kidderminster for use as a mobile carpet showroom, the train being hauled by former SVRSevern Valley Railway resident 61994 The Great Marquess. The two carriages carried the numbers CTL1N and CTL2S respectively[3]

Gilt Edge Carpets donated it to the SVRSevern Valley Railway in 1971. On arrival on 23 August the interior had pegboard clad walls with no internal fittings. It was initially used as a Bar Car with loose plastic tables and chairs. During 1977 the Manpower Services Commission helped carry out a renovation which saw the exterior re-panelled to resemble a StanierWilliam Stanier, Chief Mechanical Engineer (CME) of the London, Midland and Scottish Railway 1932-1944 Buffet Car and the interior refurbished with a more traditional décor including 3½ bays of ex-BRBritish Rail or British Railways fixed seating and a counter; the vehicle was also rewired and fitted with calor gas equipment.[4]. After a repaint it re-entered service in summer 1978.[5]

In 1981 9355 moved to Bridgnorth, where what began as a simple repaint “turned into the usual nightmare of rotten panels and even more rotten timber, all of which had to be replaced, emphasizing the need again for covered accommodation.”[6] After a further short period of service further major work was again required. During 1986 all the old panels were removed to reveal “the usual rot and decay”. The bottom edges of the roof were cut back and new sections welded in. The affected parts were renewed and the opportunity taken to add two extra doors and move three windows to make 9355 look much more like 131, the vehicle it was modelled on.[7] Following the conversion to this design of a 1930s LMSLondon Midland & Scottish Railway Buffet Car with 27 seats, 9355 was given the fictitious number 149 as a continuation of the original 1932 145 - 148 Bar Car series.[8]

In April 1996 it was repainted in GWRGreat Western Railway livery for use in the SVRSevern Valley Railway Dining Car set.[9] It remained in this condition, numbered 9355, for ten years. In 2006 it was again repainted in LMSLondon Midland & Scottish Railway livery as 149[10] and now is regularly used in the LMS Maroon set (Set L). With the exception of the half-bay near the vestibule, it is fitted with the same style of table lamps as fitted to LMS 7511 Restaurant First Open.