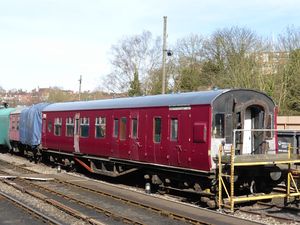 History of the Fund

Following the creation of the 'Great Western Rolling Stock Fund' in 1967, the LMS and BR Coach Fund was established in 1971. The announcement in SVR News stated that the fund had been "...set up to purchase mostly LMS, but also BR Standard (if deemed necessary) coaches for use on the SVR."[1]

The Fund operates a sales coach in LMS Brake Third Corridor 26921, selling second hand books to raise funds for the coaches it restores and overhauls. It is situated in the cattle dock at Bridgnorth.