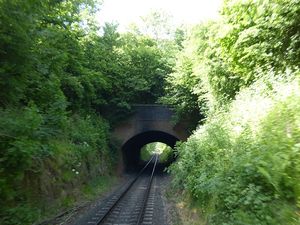 Knowlesands Tunnel (Bridge 32) is the shorter of the two tunnels on the present day SVR, being only 40 yards 2 feet in length.[1] It is located on the 1 in 100 climb from Bridgnorth towards Hampton Loade, just north of milepost 149, between Bridgnorth Down Distant and Down Outer Home signals. The main B4555 Bridgnorth-Highley road passes over the railway at this location, but the railway is not visible.