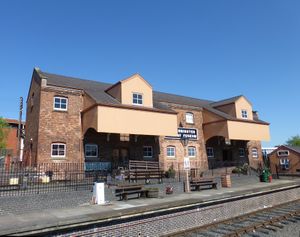 A group of six SVRSevern Valley Railway members met in November 1985 to discuss the possibility of establishing a museum to house their considerable personal collections of railway items which had outgrown the available storage space at home. The smaller of the two GWRGreat Western Railway warehouses at Kidderminster was identified as a suitable building. It was then still owned by the British Rail Property Board, although derelict and vandalised.[3]

The six members decided that the proposed railway museum, although an integral part of the Kidderminster Town station site, would be operated totally independently of the SVRSevern Valley Railway so they would not add to the already heavy financial commitments that the railway undertook. To that end they formed a limited company, The Kidderminster Railway Museum Trust Limited,[3] which was incorporated on 1 July 1986.[4] They applied for charitable status which was duly registered on 12 February 1987.[5]

Over the next few years, negotiations with BRBritish Rail or British Railways took place with a view to acquiring, renovating and converting the building. On 24 November 1989 a Presentation Day was held to which local and national businesses, government organisations and potential sponsors were invited. By that time the warehouse had been cleared of years of rubbish, so the event was held in the warehouse itself courtesy of BRBritish Rail or British Railways. A number of exhibits were displayed including name-plates, signalling equipment and notices. In the afternoon the guests travelled to Bridgnorth and back by train while the founders were able to talk to them on an individual basis.[3]

Early 1990 was spent in final negotiations with the British Rail Property Board. Agreement was reached in June 1990, with the building officially being taken over at the beginning of July 1990. The trustees decided to try and open on Saturday 25 August 1990, the first day of the August bank holiday weekend. As well as much cleaning and painting, the preparatory work included bricklaying at the back of the building to block up the ground floor windows and doors as a short term security measure. The security system was installed just seven days before the proposed opening, finally allowing exhibits to be moved in. A van was hired and a rapid tour of places as far away as Bristol, Ledbury, Birmingham and Ludlow took place collecting items for display from garages, attics, Iounges and dining rooms. The final day (and most of the night) was spent filling display cabinets, wiring signalling instruments and finishing off public access to the building and so on. With the doors still shut at one minute to 10, the last of the glass on the display cabinets was put into position. There was no time for a formal opening ceremony; by the time the workers had returned from a quick 'wash and brush up' the museum was already crowded with visitors.[6]

At opening, public access was restricted to the ground floor. Over that winter and into 1991, work took place to eradicate dry rot from the building, investigation having revealed that thirteen of the 24 main carrier beams were badly affected. Opening the upper floor also required installing a completely enclosed staircase at one end and an external fire escape at the other to meet fire regulations. During 1991 the Museum also took possession of the cattle dock at the Bewdley end of the building and began restoration work on it.[6]

By 2000, work was required to refurbish the roof which was leaking badly in many places. On 23 May 2001 the Heritage Lottery Fund agreed to meet 75% of the project costs (see below).[8] The rest of the year was spent in negotiations with the Lottery Fund on the conditions to be met, with the work not beginning until 2002. At some time around the late 1940s, the outside canopies on the front of the building had been removed and a trap door with an electric hoist put in the upper floor on the station side. The upper loading doors which were no longer needed were subsequently bricked up giving the building a rather plain external appearance. The eventual plans for the museum roof included rebuilding the canopies in their original form and restoring the upper floor openings on the station side of the building.[9]

On 23 May 2001 The Heritage Lottery Fund awarded the Trust £177,500 for roof and canopy restoration, to provide additional storage space for the museum's collections and release further floorspace for new displays.[10]

The museum has on display an extensive collection of smaller historical railway items such as totem boards, signalling equipment and locomotive name and number plates. The museum also houses the former Midland Railway booking office from Alvechurch. Working 'hands on' exhibits include a telephone exchange formerly used on the SVRSevern Valley Railway in preservation, and a lever frame from the north Signal Box at Rogart, Scotland.

This border marker was formerly located on the Tweedmouth to Kelso line.[12] It was erected on the Museum site in 2016.

The museum arranges a regular programme of films, with guest presenters showing historic railway transport films. It operates signalling weekends using its large collection of signalling equipment for basic tuition before participants go on to work in one of the SVRSevern Valley Railway's signal boxes when steam trains are running. Other events include railway photograph fairs and "Photographs on the road". The museum also hosts meetings of groups associated with the SVRSevern Valley Railway. Exhibitions are also held and an incomplete listing is below:

The museum was closed for much of 2020 due to the COVID-19 pandemic. It reopened in August 2020, although still unable to host meetings and similar events.

The Guild of Railway Artists stages its annual (previously biennial) art exhibition at Kidderminster Railway Museum. Frank Hodges, chief executive officer of the Guild was reported by the Kidderminster Shuttle in 2014: "The Guild looks upon the museum as its home venue having exhibited some ten times since its first event there in 1994.”[13] Further exhibitions were held or planned as follows:

As an unconnected enterprise, the SVRSevern Valley Railway's own 'museum', The Engine House at Highley displays a collection of larger items such as locomotives and rolling stock.