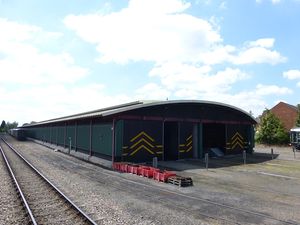 Fundraising including an SVRA raffle had raised over £100,000 by spring 1998. However the HLFHeritage Lottery Fund (National Lottery Heritage Fund from 2019) requested a scaled-down application which was submitted on 12 August 1998 at a value of £2.4m. Plans for the locomotive display building were dropped, while the carriage shed became the modern design with a single span curved roof eventually built. The footbridge extension and restoration of carriages were still included, although ultimately these too were dropped.[4] Peter Lyons, a Senior Partner at International Architects Peter Hing & Jones of Birmingham was appointed architect. This was constructed on the sloping site of the goods wagon marshalling yard and involved great expertise sas it was the only building he had designed which was not vertical due to it being at right angles to the gradient.[5]

On 12 May 1999 the SVRSevern Valley Railway announced that it had been awarded a grant of £1.757m towards construction of the carriage shed, at the time the largest grant made to a heritage railway. Planning permission was granted on 22 June. Further fundraising secured another £170k within 2 months of the grant, reaching 75% of the partnership funding required and allowing contracts to be signed with the design and build contractors Tarmac Building (later Carillion).[6]

Construction by the contractors began on 20 September 1999 with erection of steelwork beginning on 20 September. On 1 November the partnership funding target of £586k (25% of the total cost) was achieved.[7] Construction was completed with the keys being formally handed to the SVRSevern Valley Railway by the Carillion site manager on 19 April 2000; the same day saw the first rake of carriages propelled onto Road 1. Track installation inside the shed by the P Way department was completed by the end of June 2000.[8] The SVRASevern Valley Railway Association 'Millennium raffle' in April 2000 raised around a further £18,000 for the project. This and other additional fundraising secured sufficient money to allow SVRSevern Valley Railway(H) to announce at the 2000 AGM that the extension to Kidderminster Footbridge would go ahead. However the 2000 boiler crisis led to these plans being put on hold,[9] since when they have never been resurrected.

The shed has 4 internal roads, and is flanked either side by two uncovered sidings. The shed is almost ¼ mile long, and is able to house up to 62 carriages.[10] From left to right, the roads are numbered from 1 to 6. Roads 1 and 6 are the uncovered external roads; Roads 2 and 3 offer maintenance facilities, with there being a pit on road 2 for undertaking running maintenance. Finally roads 4 and 5 offer further maintenance, but contain a platform in the first half of the shed, which is able to facilitate the cleaning of the rolling stock.

The railway had identified a need for a bay for quick repairs and repaints, with ad hoc arrangements in the Carriage shed.[11] A train repairer team was formed and a scaffolding platform located on 4 and 5 roads, but planning issues in 2017 brought a two year halt.[12] Work restarted when the platform was relocated to roads 2 and 3, with further expenditure identified as necessary to reduce external noise levels[13].