Difference between revisions of "Kidderminster" 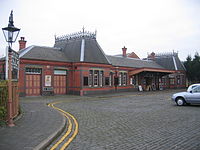 Kidderminster is the Southern terminus of the SVRSevern Valley Railway, located within the county of Worcestershire. The railway shares a railway link at this location to the Network rail mainline, on the Worcester Shrub Hill to Birmingham Snow Hill Line. The next station along the line, in the DownIn reference to the direction of travel means away from the major terminus (i.e. towards Bridgnorth on the present day SVR) direction towards Bridgnorth, is Bewdley. The town of Kidderminster is famous for its Carpets, for which it was of worldwide reknown for many years.

The station is the newest of the railway's stations, having been built by the railway on the site of the old Kidderminster Mainline Goods Yard, which occupied the site before the railway was preserved. The building was constructed to blend correctly to the historic nature and atmosphere of the railway, and is home to a large covered concourse, booking office, and facilities for visitors. Please see The development of Kidderminster Town Station for more details about the building of the station.

The layout of the station offers the railway a variety of running options, and is often home to frequent simultaneous train movements during the busier timetable spells. The station has two platforms for passenger use, which both offer the ability to depart towards Bewdley. These platforms are each served by their own engine runaround lines, where watering facilities for the steam locomotives are available. Both engine runaround lines also possess Dock platforms at the station building end, which are frequently used to stable the railway's inspection saloons and dining carriages for servicing and restocking between dining trains.

Facilities for visitors at Kidderminster Station are comprehensive; Under the covered concourse is the railway's Cafe, the gift shop, and the heritage sweet shop. The "King & Castle" pub forms an integral part of the station buildingm and serves a selection of real ales and alcoholic beverages. Also located on the site is the Kidderminster Railway Museum, and the Coalyard miniature railway, which offers a short ride adjacent to the Kidderminster Station platforms for a small additional fee.

The site at Kidderminster is also home to key parts of the preservation infrastructure of the railway. The main Carriage Repair Works, aka North Star Works, is located near the Network Rail Car park, and is where a considerable amount of restoration on the railway's heritage carriage fleet takes place. Visitors riding the railway towards Bewdley will also notice the large railway yard, which will soon be home to the railway's Diesel Depot, of which construction is planned imminently. Likewise visitors will also notice the 1/5th Mile long Carriage Shed, where the SVRSevern Valley Railway's working rakes of carriages are stored when not in use on the regular services.

The station has a support group, the Friends of Kidderminster Town Station.