The box was built in its current position in 1883, and has not changed significantly in that time, with the exception of modifications to the interlocking of the lever frame. The box previously controlled access to colliery exchange sidings, the site of which is now the Engine House. Two ground frames once existed in the section to Hampton Loade, allowing access to Alveley Sidings, namely Alveley North and Alveley South ground frames. An intermediate token instrument was provided to allow trains to be locked in to these sidings. The North ground frame was taken out of use in 1974, whilst the South ground frame survived until an unknown later date, released on the Highley-Hampton Loade token.

Highley retains its original 14 lever McKenzie and Holland 1873 patent lever frame, with 11 working levers, 3 spare, and no spaces. The interlocking was replaced in 1903 with more standard tappet interlocking by the GWRGreat Western Railway.

The box works in both directions using Electric Token Block regulations, and is fitted with four Tyer's No. 9 token instruments. In the UpIn reference to the direction of travel means towards the major terminus (i.e. towards Kidderminster on the present day SVR) direction, Highley works to either Arley (short section) or Bewdley North (long section). The Highley-Bewdley North long section token unlocks Arley signal box so it may operate as a ground frame, allowing for access to the yard when that box is switched out. An intermediate token instrument is provided to allow trains to be locked in. In the DownIn reference to the direction of travel means away from the major terminus (i.e. towards Bridgnorth on the present day SVR) direction, the section is to Hampton Loade (short section) or Bridgnorth (long section). The Highley-Bridgnorth long section token unlocks a 2-lever ground frame at Eardington, allowing access to the siding located there. 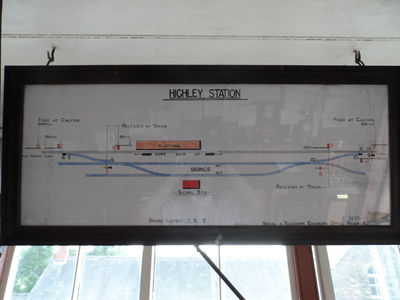