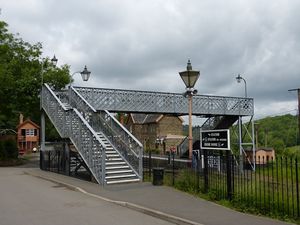 GWRGreat Western Railway footbridges followed two basic styles. That of the 1880s is reflected in the footbridges at Bridgnorth & Bewdley with cast iron columns. The present footbridge at Highley is intended to mimic the more utilitarian style of the early 1900s. 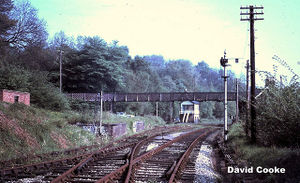 The original Highley Footbridge (David Cooke)
Construction of the first footbridge at Highley, together with an additional siding for horse boxes, was authorised by the GWRGreat Western Railway Traffic Committee on 26 April 1912 at a cost of £845. Further expenditure of £84 on foundations for the footbridge was authorised in July 1914. This bridge consisted of a steel lattice girder structure of two spans. At the west end it connected directly to the footpath leading up the hill to Highley Village, and therefore required steps only at the station platform end.[1] These included a 'landing' level from which both the platform and barrow crossing could be accessed, as seen in the photograph below.

The bridge continued in use until BRBritish Rail or British Railways ended passenger services in 1963, after which its condition deteriorated. When the SVRSevern Valley Railway acquired this portion of the line at the end of 1972, they reluctantly deemed the bridge unsafe and demolished it on 11 April 1974, at the same time as repairs to the Underbridge on Station Road, Highley were being carried out, just before the reopening of services to Highley on the following Easter weekend.

The originally intended installation date was 10 April 2009. This date was missed, with the General Manager reporting in May that it was primarily due to the fabricator underestimating the complicated nature of the construction of the main span. Whilst the main stairwells were complete the main span still needed considerable work to complete.[4] During April the end columns were in situ and the 'cross girders' lifted into place using 'Toby Jiblets', the 6-ton steam crane.[5] However with the main running season underway the decision was taken to delay the installation until September/October giving sufficient time for the main span to be completed to a high standard. The installation could then take place during daylight hours when the line is clear.

The footbridge was formally opened by SVRSevern Valley Railway Patron HRH The Duke of Gloucester on 21 October 2009, on the occasion of his visit to the the newly-opened Engine House. The bridge carries a plaque to mark this event.