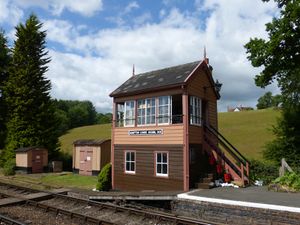 Hampton Loade Signal Box (HL) is a McKenzie and Holland-style signal box, situated on the Up end of the main platform at Hampton Loade station. It works to Bridgnorth and Highley using ETT regulations.

The original signal box was brought into use in 1883 in conjunction with the addition of a loop and second platform, with Board of Trade approval of the new arrangements being granted in June of that year.[1] The section to Highley latterly contained two ground frames released by the token, Alveley North and Alveley South, allowing access to the coal sidings at Alveley. An intermediate token instrument was also provided.

On the closure of the line in 1963, the box was largely dismantled, with parts reportedly being used to build a chicken coop in the garden of the station house. The box was rebuilt, starting in 1971, using parts from the original box and that at Stourport, incorporating the lever frame from Ledbury North End. Also used was Pensnett box: the top floor had been moved to Bridgnorth signal box in November 1968 but the wooden ground floor sections were left in situ at Pensnett.[2] They were then taken apart in January 1970 and moved to Hampton Loade where they were used in rebuilding the partly demolished box there.[3] Having been built around the original frame of the building, it is a facsimile of the original box. The new box and signalling was recommissioned on 19 May 1973, initially working to Bridgnorth using One Engine in Steam, and then Electric Token Block a few weeks later after the commissioning of the token instruments. The ETT section to Highley was signed into use on 2 March 1974, with the token releasing Alveley South ground frame.

The box gained the ability to switch out by Whitsun in 1975, and the down and up distants were brought into use in 1981 and 1982. Several overhauls of the box equipment have been carried out, including point rodding in 1982, rewiring in 1983, the mechanical interlocking in 1992, and a second rewiring in 2012/2013. The latter was done in conjunction with the resiting of the token instruments, which had previously been sited on the brick support for the fireplace, which was not rebuilt in 1973. A replacement fireplace and chimney were brought into use on 27 December 2014. Refurbishment in 2019 saw new steps made in the correct style, new shiplap boarding and new windows for the locking room.[4]

Hampton Loade contains a 16-lever GWR 5-bar vertical tappet frame dating from 1938, replacing the original which was removed and scrapped on the closure of the line. It was originally in Ledbury North End Signal Box, with 15 working levers, no spares, and one space.

The box works in both directions using Electric Token Block regulations, has two Tyer's No. 9 token instruments, and is able to switch out. The adjacent signal boxes are Highley (up) and Bridgnorth (down), which work directly to each other when Hampton Loade is switched out. The intermediate siding at Eardington can only be accessed on the long section token. 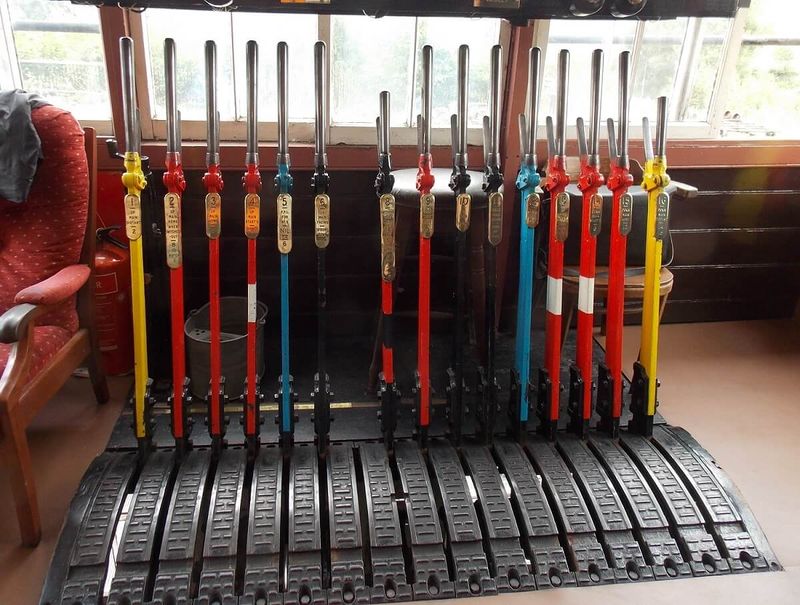 All signals are of late GWR/BR(W) steel tubular post and enamel arm design. Signal 16, the Down Distant, is motor worked.