Difference between revisions of "Hampton Loade" 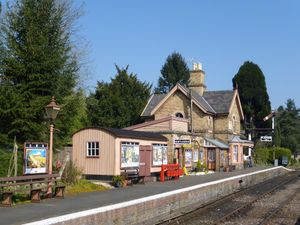 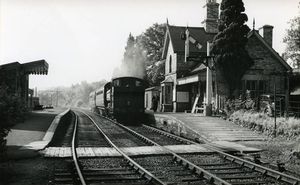 Hampton Loade station is a minor country station located between Bridgnorth and Highley, located close to the River Severn. On opening, the station had only a single platform and a siding, with a second platform and signal box being added in 1880s.

Hampton Loade station has two platforms and a signal box, allowing trains travelling in opposite directions to pass. However the crossing loop is the shortest on the railway, only able to hold a loco and 8 full-length coaches. During periods of lighter traffic, when Hampton Loade signal box is switched out, all trains use platform 1, adjacent to the station house.

During the early years of SVRSevern Valley Railway operation (early 1970s) Hampton Loade formed the southern terminus. Evidence of this remains in the form of the presence of the down starting signal on platform 2, which is normally only used for up trains.

The station house is built of yellow brick. Unlike some of the other station houses including Highley and Arley, this was not upgraded during the GWRGreat Western Railway era by the extension of the waiting room and provision of an extra bedroom. In late 2014 the railway announced that as the station house had become vacant, plans were in hand for it to be converted into SVRSevern Valley Railway volunteers' accommodation,[1] subject to final agreements and costings between Severn Valley Railway (Holdings) PLC and Hampton Loade Station Fund. This would provide a more suitable facility than GWR 2426 Toplight Full Third which had been stabled at Hampton Loade since 1988 for that purpose. 2426 continued in use until mid-2016 and was briefly succeeded by GWR Riding Van 55.

The station has a small kiosk serving snacks and hot and cold drinks. The Hampton Loade Station Fund Shop and the Barry Railway Carriage Trust sales van are both situated in the bay platform. There is a small picnic area next to the station.

Although the station has a very small car park, road access to the station is limited and SVRSevern Valley Railway visitors are advised not to travel to Hampton Loade station by car.

Although the village was also historically known as Hampton's Loade[2], the station was called Hampton at opening, but within a month had adopted the name Hampton Loade which it has retained ever since[3].
Key dates in the history of Hampton Loade were:

The station and the nearby Unicorn Inn are actually situated in the hamlet of Hampton. The village of Hampton Loade is on the other bank of the river (Loade comes from the Saxon word 'lode' meaning ford). There is now no ford or bridge, but in modern times a passenger foot ferry operated in summer months. However, the ferry has not operated since 2013, and it is not known if or when it will return to operation.

The Paddock Garden Railway, a 32mm gauge model railway, is situated adjacent to the station. This may be open on Sundays and Bank Holidays.

Hampton Loade was used as a flming location for the film The Englishman Who Went Up a Hill But Came Down a Mountain and the BBC TV drama The Incredible Robert Baldick.

On 28 September 2009, a derailment occurred when the tender of LMS Ivatt Class 4 43106 hauling a down passenger train became derailed as it approached Hampton Loade. There were no injuries. The immediate cause of the accident was the leading right-hand wheel of the tender flange climbing over the rail at the site of a track twist. An incorrect spring had been fitted to this axle of the tender.[5]