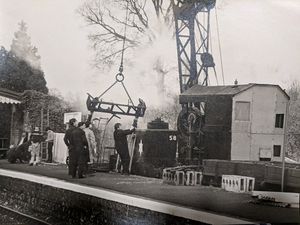 Formerly resident on the SVR, GWR RS38 is thought to be the last steam crane built for the GWR and supplied by Joseph Booth & Bros of Rodley, Leeds in 1947. The usual lifting capacity is 2½ tons. In GWR/BR service RS38 was paired with two match trucks, DW38 and DW39, both built in 1917 at Swindon. It was used for coaling and ash disposal at Stourbridge MPD until its closure by BR in 1967.[1]

Following the closure of Stourbridge MPD, the crane and match trucks were acquired by the Severn Valley Railway Company, arriving on the SVR on 13 April 1968. All three were repainted in GWR livery in 1971. The crane was briefly used for locomotive coaling and subsequently for P Way and other engineering activities.[1] A larger 6-ton crane DW35 was acquired in 1974, following which RS38 and its match trucks left for the Llangollen Railway in 1978.[2]