Difference between revisions of "GWR Pannier 5764" 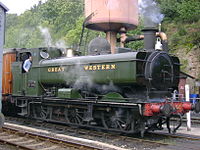 5764 is a GWRGreat Western Railway CollettCharles Benjamin Collett, Chief Mechanical Engineer (CME) of the Great Western Railway 1922-1941 5700 class 0-6-0PT ‘pannier tank’, one of two examples on the SVRSevern Valley Railway (the other being 7714). This was the largest class of engine designed and built by the Great Western Railway; more than 860 were built between 1929 and 1950. Pannier tanks could be found at work all over the former GWRGreat Western Railway system and although designed primarily for shunting duties, they were regularly used on local freight and passenger workings. The class was rated 4FThe British Railways system of classifying steam locomotives by power using a number from 0, least powerful, to 9, most powerful, followed by either F for freight, P for Passenger or MT for Mixed Traffic. by British Railways.

BRBritish Rail or British Railways sold a number of pannier tanks, including 5764, to London Transport who used them mainly to run engineering trains on their Metropolitan Lines, operating from their Neasden Depot. While there, 5764 was allocated the number L95.

5764 was acquired direct from London Transport, arriving in LT livery on 19 June 1971 and entering service the same year. An indication of how quickly it entered service may be judged by the lighting of a fire in the engine whilst it was being unloaded from the low-loader.

5764 last saw service in January 2011. The locomotive is currently stored at Kidderminster Carriage Shed, a facility not normally accessible to the general public.

The locomotive is owned by the SVR Pannier Tank Fund who also own GWR Pannier 7714.