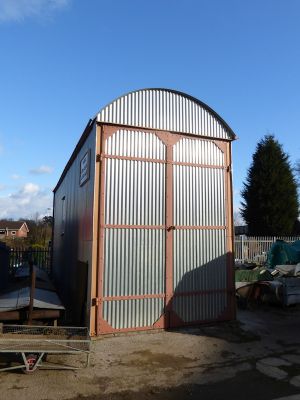 When the GWRGreat Western Railway began the steam bus service between Bridgnorth and Wolverhampton in 1904, they built a small garage at Bridgnorth Station to house one of the buses. It was a steel and wooden framed building with corrugated iron cladding, measuring approximately 30ft long by 10ft wide. The original location of the garage, with its black cladding, can be seen behind the pannier tank in the Sellick photograph below. It is now part of the Bridgnorth Development Project site.

The garage was still in situ when the SVRSevern Valley Railway acquired Bridgnorth, and can also be seen in David Cooke’s photograph in 1968. Although built for the early single deck steam and motor buses, it was sufficiently tall to take a double decker bus, and in the 1970’s was home to a preserved Weardale bus. After being dismantled, the remains of the garage were later moved to Kidderminster, and by June 2010 the Friends of Kidderminster Town Station had begun a project to re-erect it in the compound on the site of the old coal yard.[1]

Much of the original building survived for re-use, although new corrugated iron cladding has been used in place of the original which had become too rusty. The garage now provides a home for the Friends' Scammel Mechanical Horse. It can be seen from the railway when leaving Kidderminster, between the end of the SVRSevern Valley Railway car park and the Kidderminster Footbridge.