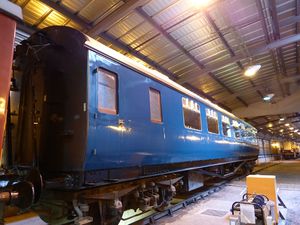 GWRGreat Western Railway 9654 is a CollettCharles Benjamin Collett, Chief Mechanical Engineer (CME) of the Great Western Railway 1922-1941 bow-ended Restaurant Third Open (RTO) carriage. It was built in 1925 to Diagram H32 and initially formed one end of three-car articulated (“Tri-art”) dining set H32, which was rebuilt as three single units in 1937[1].

9654 later saw DepartmentalRolling stock used for the railway’s own functions (engineering etc.) rather than for general passenger or goods traffic. use as No DW 150326[2] in the second WR Control Train. It was formerly part of the NRMThe Railway Museum, formerly the National Railway Museum’s National Collection and first arrived on the SVRSevern Valley Railway from York in 1981 along with sister coach 9653. It is now owned by SVR(H) and as of November 2015 is currently at Bewdley under-going restoration including the fitment of the correct pattern of luggage racks.