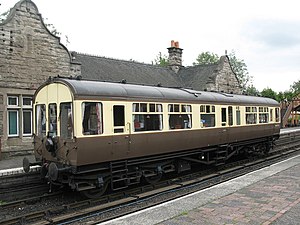 80972 is one of six 52ft inspection saloons (INSP) built at Swindon as lot number 1701 to diagram Q13. It was ordered under FW Hawksworth’s tenure as GWR CME, although it has little visual similarity to his other carriage designs. It entered service in 1948 in what had by then become the BR Western Region.

80972 entered preservation in 1973 at the Birmingham Railway Museum (now Tyseley Locomotive Works). It arrived on the SVR circa February 2006, having been bought by Phil and Caroline Swallow, owner of Taw Valley and members of the Great Western (SVR) Association. It was overhauled before entering service circa March 2011.

As of July 2015, 80972 is used as an Observation Car, normally being attached to the end of a rake of carriages for private hire or ‘cream tea’ specials. It seats up to 23 people and is furnished with armchairs, settees and tables in the two saloons, which are separated by a corridor off which are found a toilet, small kitchen and guard’s office. It is finished in plain BR(W) chocolate and cream livery with no insignia, and is numbered W80972W (BR practice was to include a prefix showing the area to which the carriage was allocated and a suffix for inherited carriages indicating the company of origin).