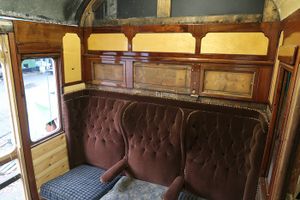 It arrived on the SVR on 6 January 1973 from Bristol, having been bought by the Great Western (SVR) Association. Since then it had been stored in various locations on the SVR, but moved to Bewdley Down Yard in 2014 for restoration to begin. Work began in earnest in 2015; progress on the restoration was shown on the Great Western (SVR) Association website. In October 2018 the coach moved to Carriage Repair Works at Kidderminster.

In January 2020 the GW(SVR)A announced plans for a launch train on Sunday 31 May 2020 to celebrate the entry of 6045 into service[2]. The restoration was completed in April 2020, although plans for the launch train were put on hold by the 2020 coronavirus disease (COVID-19) pandemic[3].