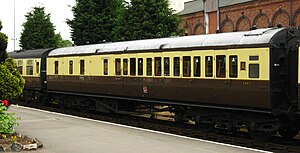 5833 was bought by the The Great Western (SVR) Association in 1973 from Briton Ferry in South Wales, where it had been in use as an engineers vehicle. Following restoration, it entered service in 1976, when for a time it was used as part of the GWR rake of carriages used on the main line as well as on the SVRSevern Valley Railway itself. In a later overhaul, 5883 was one of the first SVRSevern Valley Railway coaches to have the seating renewed with reproduction GWRGreat Western Railway-pattern upholstery.