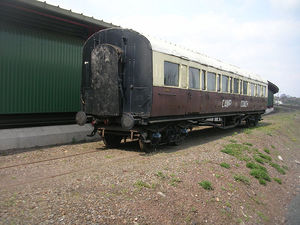 GWRGreat Western Railway CollettCharles Benjamin Collett, Chief Mechanical Engineer (CME) of the Great Western Railway 1922-1941 Bow-Ended Coach No 4786 is a standard 57ft full third coach, completed in June 1928 to diagram C54, lot 1369. The internal layout as built seated 64 passengers in eight compartments, with a side corridor and a toilet cubicle at each end. It later saw DepartmentalRolling stock used for the railway’s own functions (engineering etc.) rather than for general passenger or goods traffic. use as No DW 150208. The coach was originally bought by SVR(H) and was latterly used as accommodation at Kidderminster. As of May 2015 it is stored alongside Kidderminster Carriage Shed awaiting repairs.