2857 is a GWR Churchward 2800 Class locomotive, designed for heavy freight work. The GWR Power and Weight Classification were class E and axle load Blue respectively. It is fitted with the GWR 'Std. 1' boiler, which was also fitted to the 2900, 4000, 4900, 6800 and 6959 classes. During World War II some classes of locomotives were permitted to haul loads heavier than those specified in the working books for their power classification, distinguished by the white letter "X" painted above 2857's number plate.[1] Post-war the class was rated 8F by BR.

2857 was built in 1918 at the GWR’s Swindon Works and delivered new to Salisbury GWR depot in May of that year.[2] During a working life of 45 years it was based in many depots around the GWR (and later British Railways Western Region), including a brief spell at nearby Stourbridge shed in the early 1950s. The locomotive was withdrawn from Neath depot in April 1963 having recorded a total of 1,276,713 miles in service.[3] 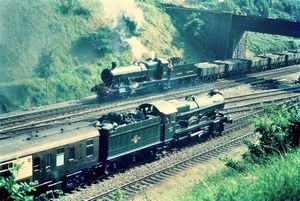 At the end of 1980 the SVR announced that preserved boilers on the railway needed to be brought up to 1980’s BR standards. The owning group therefore resumed the restoration, with the boiler being overhauled by the SVR as a contract job and the opportunity being taken to fit the replacement cylinder block among many other tasks. In spring 1984 a raffle organised by the SVRA Wolverhampton Branch was held to raise funds to help complete the restoration.[9]

Following these troubles, 2857 became a reliable performer, recording the highest annual mileage of any steam locomotive on the SVR in each of the years 2013 to 2015. Mileage since 2010 is recorded on the 2010-2019 Timeline page. However it became apparent in 2016 that as the locomotive approached its 100th anniversary, significant work would soon be required including relining the cylinders, replacing valves and pistons and attending to a bent piston rod. The locomotive was therefore withdrawn for an intermediate overhaul in September 2017, with a complete boiler re-tube being carried out at the same time.[13] The locomotive returned to service on 16 May 2018[14], 100 years to the month since first entering service. On 18 September 2018 the locomotive passed 100,000 miles in preservation, carrying both a headboard "Still gong strong, 100,000 miles" and a "100" headcode.[15] The 100 headcode remained in use during the Autumn Steam Gala which began on 24 September.[16] It reappeared on 11 November for the centenary of Remembrance Day.

During Autumn 2021 it underwent a Valve and Piston exam.[17] The boiler certificate was extended six months from July 2022 and the final day in traffic was be on 2 January 2023[18] The Society plan then to take her through a 10 yearly overhaul and return her to steam, hopefully in time for Great Western 200 in 2035: the Society and Railway have agreed to carry out a full condition report on the locomotive to determine the work load and cost involved. Decisions can then be taken after that has been completed.[19]