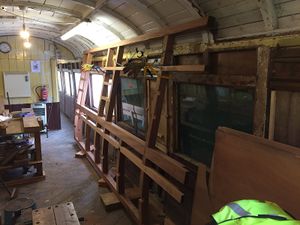 Bodyside frame components for GWR 9581 Wheelchair accessible Buffet Car being trial assembled inside 2426 in March 2018
GWR Toplight Full Third 2426 was designed by G.J. Churchward and is the oldest bogie coach on the SVR. It is mounted on 8 foot American bogies.

2426 was built at Swindon in 1910 as part of Lot 1167 to Diagram C30. Originally the coach seated 64 passengers in eight compartments and included a toilet at each end. Eight doors per side were included, located in and opposite each compartment.[1] It was used on passenger services until May 1952.[2]

In 1952 it was converted to a camping coach and renumbered W9918W.[3] Four of the compartments became sleeping accommodation, while other compartments were removed to create kitchen and living areas. Many of these camping coaches were removed in the 1960s, and 2426 was then used by the BR(W) Signal and Telegraph department, before being withdrawn in the early 1970s and placed in store at Swindon.

2426 was purchased by SVR(H) in 1972 for use as volunteer dormitory accommodation. It was initially used for that purpose at Bridgnorth before moving to Hampton Loade in 1988, where it continued in that role until mid-2016. It was then moved into storage at Kidderminster pending overhaul, with its place at Hampton Loade being taken temporarily by GWR Riding Van 55 until fitting out of volunteer accommodation in the station building was completed.

Ownership of 2426 has been transferred to The Great Western (SVR) Association. In March 2017 2426 spent a few weeks in the siding on Sandbourne Viaduct at Bewdley before moving into Bewdley Down Yard for conservation work including frame and window repairs. For a few years it will become the LNER Carriage Group's workshop, replacing GWR 9581 Wheelchair accessible Buffet Car (formerly 5043 Full Third). The Association's long-term aim, after GWR 4786 Full Third, is to restore it to its original condition and to this end parts are being made and drawings are slowly being found to aid restoration. Work carried out in early 2019 included making new coving for the corridor and both the new distant switch and regulator cupboard[4].