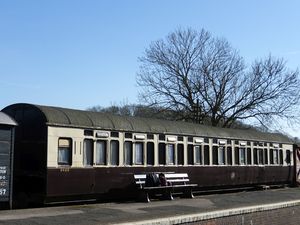 GWRGreat Western Railway Toplight Full Third 2426 was designed by G.J. ChurchwardGeorge Jackson Churchward, Chief Mechanical Engineer (CME) of the Great Western Railway 1902-1922 and built in 1910 at Swindon. Originally the coach would have seated 64 passengers. It was converted to a camping coach in 1957, and renumbered W9918W.

2426 was purchased in 1972 for volunteer dormitory accommodation, and was used for that purpose at Hampton Loade until mid 2016. It is the oldest bogie coach on the SVRSevern Valley Railway, and is now owned by The Great Western (SVR) Association. The Association's long term aim is to restore it to its original condition.