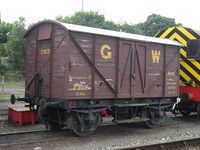 The brown livery of 6 ton Fruit Van 2303 denotes it as "Non Passenger Coaching Stock", meaning that as it was fitted with vacuum brakes, it was allowed to run as part of an express passenger train.

It was built at Swindon in 1898 and originally numbered 47883 in the Goods series. It was later renumbered 2303 in 'Brown Vehicle' series between 1916 and withdrawal in 1958. It was then converted to Packing Van and numbered DW 150063 in departmental use. It was withdrawn for scrapping from BRBritish Rail or British Railways Tyseley in 1973, and acquired by The GWR 813 Preservation Fund. It underwent an extensive rebuild in 1988.