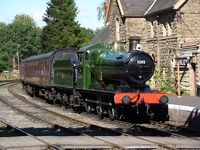 When 3205 was withdrawn from service in 1965, she was bought for preservation by the 2251 Fund based at the Dart Valley Railway (now the South Devon Railway). In 1967 3205 became the first locomotive on the fledgling SVRSevern Valley Railway, arriving in working order on 25 March accompanied by 4 coaches. The locomotive was steamed on a number of ‘Gala’ occasions between then and the official opening day in May 1970; the absence of a Light Railway Order meaning the public would purchase a ‘Day Menbership’ which allowed them to travel for free!

On opening day, 23 May 1970, 3205 hauled the first service train from Bridgnorth. She continued in service until expiry of her boiler ticket in 1973. An overhaul was completed in late 1979, in time for the locomotive to take part in the grand parade at the Rocket 150 celebrations at Rainhill in May 1980. Part of that overhaul involved removal and splitting of the two halves of the cylinder block to fit new iron faces on which the slide valve operate. At that time the casting of replacement cylinders was considered all but impossible.
It is thought that this repair may have been the first time in standard gauge preservation that a cylinder block was split. Nowadays, of course, the fitting of replacement cylinders is becoming the norm.
3205’s second period of SVRSevern Valley Railway service ended at the end of 1984 with firebox issues, by which time the locomotive had logged 10,541 miles.

3205 left the SVRSevern Valley Railway for the West Somerset Railway in 1987, before returning to the South Devon Railway in 1998.

3205 made a welcome return visit to the SVRSevern Valley Railway as a guest at the Autumn 2010 Steam Gala, having completed a major overhaul in May that year.