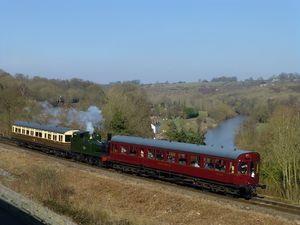 1450 spent her early life in preservation at the Dart Valley Railway (now the South Devon Railway) where it carried the name 'Ashburton'.[10] She was purchased in 2001-02 by her present owner Pull Push Limited, of whom Mike Little is sole director, and re-located to the Dean Forest Railway.

1450 arrived at the SVR from the DFR in March 2014, initially on hire for the year. Subsequently 1450 has been listed as part of the home fleet. Although not powerful enough to haul service trains on her own 1450 did so in 2014, double heading with 4566 to provide the required power, due to a number of ongoing locomotive repairs leaving the SVR unexpectedly short on engines. The locomotive was regularly used on Footplate Experience duties, as well as appearing on charters and at galas on the SVR and elsewhere. She was often paired with the owner's autocoaches 178 and 238 which are also resident on the SVR.

Whilst 1450 was winterised at Bridgnorth MPD over 2017-18 she returned to GWR livery, at the owner's request, for the remainder of its boiler ticket.[11]

It was withdrawn from traffic in December 2020 at the expiry of its boiler certificate. The owner made arrangements to send it for overhaul at the Flour Mill in the Forest of Dean and it left on 4 August 2021[14][15].