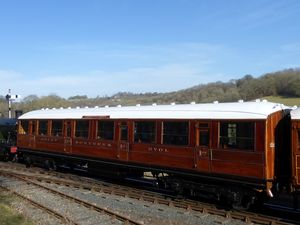 GNRGreat Northern Railway (LNERLondon & North Eastern Railway) Corridor CompositeCarriage having more than one class of seating, ie First and Third or latterly First and Standard. No 2701

GNRGreat Northern Railway 2701 was built at Doncaster in August 1922 as one of ten carriages to Diagram 164K. It is a Corridor CompositeCarriage having more than one class of seating, ie First and Third or latterly First and Standard. (CK), seating 21 first class passengers in three and a half compartments and 24 in four third class compartments. The carriage was involved in a collision at Retford during its first year of use, but survived to become LNERLondon & North Eastern Railway No 42701, and BRBritish Rail or British Railways E42701E. It remained in passenger carrying service until 1958 when, together with sister carriage No 69, it was converted at Stratford to a camping coach and stationed at Mundsley until closure in 1964. Following transfer to departmental stock its long and varied career on "The Big Railway" ended c1980 at Boston serving as the painter's bothy.

2701 was then purchased by the landlord of the Plough Inn, a few miles away at Swineshead. Following a difficult road transfer involving a lorry and two cranes recounted here it was to be converted to a dining room, but the project failed to gain planning permission. Despite an attempt to preserve it in Norfolk, 2701 was moved to another pub at Stoneyford Lodge in Derbyshire, also with the intention of use as a dining room, but this time the adjacent open cast mine was extended over its intended site.

Filming took place in October 2000 for an episode of the 2001 TV series “ Off the Rails” featuring Vince Henderson. The restoration of GNRGreat Northern Railway 2701 was one of the items featured. In 2001 the Heritage Lottery Fund awarded a grant of £84k towards the cost of restoration, and GNRGreat Northern Railway No 2701 entered SVRSevern Valley RailwaySVRA:Severn Valley Railway AssociationSVRS:Severn Valley Railway Society service in July 2008, being formally launched into service on 16th August of that year by Mr Tim Godfrey, a grandson of Sir Nigel GresleySir Nigel Gresley, Chief Mechanical Engineer (CME) of the London & North Eastern Railway 1923-1941. It was declared the overall winner in the Heritage Railway Association Carriage & Wagon competition 2009[2].

In late 2014 2701 received an overhaul and revarnish at Kidderminster Carriage works, being released to traffic in time for the start of the 2015 season.