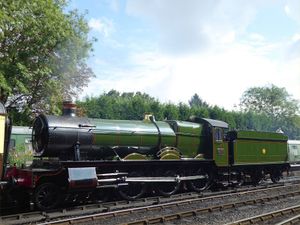 Hagley Hall was last in steam in 1986, after which time it was stored awaiting an overhaul. In early 1999 the Swindon Steam Museum contacted the SVRSevern Valley Railway to ask if the locomotive could be placed on loan as a static exhibit at the Designer Shopping Complex (sited on the former GWRGreat Western Railway Swindon Works). The SVRSevern Valley Railway(H) Board agreed, and after a cosmetic restoration was carried out at Bridgnorth, the locomotive left for Swindon in May 1999, with the loan expected to be for 'at least two years'.[3]

The move to Swindon stimulated interest among the working members for an eventual return to steam. Being company-owned, 4930 had no separate owning organisation to provide stimulus and support for this. A "Hagley Hall Restoration Group" was therefore established, with the approval of SVRSevern Valley Railway(H) and the support of the SVRA, and intended to be made up principally of the younger generation of working members. The first open meeting was held on 25 July 1999, just two months after 4930's move to Swindon. The group quickly morphed into the "Friends of 4930 Hagley Hall" and began fund raising.[4]

The locomotive returned from Swindon in 2007 and then spent a period on display in The Engine House. The overhaul eventually began in October 2013, with significant involvement of members of the Friends and also SVRSevern Valley Railway apprentices whose training was funded with the help of the Charitable Trust.

In 2010 the Friends published on their website a letter from Nick Ralls, the SVRSevern Valley Railway's General Manager, stating that they would have an equity stake in the locomotive in return for their fundraising. By September 2016 the Friends had raised over £110,000 towards the overhaul.[5]

Initially an independent group, from 2018 the Friends became fully integrated into the SVR Charitable Trust so they can maximise income through Gift Aid. [6]

From time to time the Friends operate a sales stand at galas and special events on the SVRSevern Valley Railway.