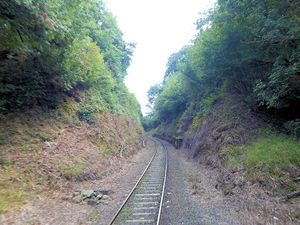 Eymore Cutting is situated between Bewdley and Arley at the south (Bewdley) end of Victoria Bridge. It is a designated Site of Special Scientific Interest (SSSI).

The extract from the OSOrdnance Survey 6in map above, published in 1905, shows Eymore Cutting and the immediate surrounding area. The railway runs along the southern edge of the ancient wooded area of Eymore Wood. The cutting begins to the east of Eymore Farm and deepens as it curves and descends towards Victoria Bridge at a Gradient profile of 1 in 145. The signal post ("S.P.") immediately before Victoria Bridge is the distant signal on the approach to Arley station.

Trimpley Private Road Bridge was constructed when the railway was built in order to provide access to the Wood from Eymore Farm which was situated to the south of the cutting. A stream which runs through the Wood is carried underneath the cutting through a Victorian syphon culvert. This is included as item SVR040* in the Wyre Forest District Council Local Heritage List, which notes it as being an "extremely unusual feature".[note 1] The positions of the road bridge and the stream can both be seen on the map extract.

The Trimpley Reservoirs & Waterworks were constructed in 1964 and commissioned in 1967.[1] The land south of the Farm buildings is now the main reservoir, with the Waterworks situated on the area of land between the wood and the railway. Water from the reservoir is pumped to the waterworks via Trimpley Pipe Bridge which now also spans the cutting a short distance east of the road bridge.

The pictures of the cutting below are all looking west (towards Arley) and progressively travelling in that direction:

On 19 March 1991 Eymore Cutting was designated as a Site of Special Scientific Interest (SSSI) by English Nature (now known as Natural England) due to its unusual geology. The designation summary is as follows:[2]

The cutting is notable as the only available exposure of fossiliferous Eymore Farm marine band, a Bolsovian Substage rock.[3][4]. It is a rare occurrence of coal-bearing mudstones appearing at surface level, first described in 1946.[5]

Unfortunately the cutting's geology has proved less than stable over the years.

In 2009 the condition of the SSSI was surveyed and assessed by Natural England as 'Unfavourable'. The assessment noted that "The features are only visible from the trackbed of the railway line. Vegetation growth has occurred and obscures some features. Rock-netting has been applied to southern cutting wall and obscures views of the features and denies physical contact with, and collecting from, the features on that wall. Small landslips on the northern cutting side are more of a hazard to the line than damaging to the SSSI, unless they result in the installation of further rock-netting."[11]