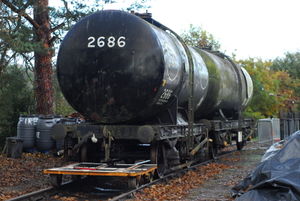 Ex Esso Fuel Tank Wagon No 2686
Private Owner Class B Oil Tank No 2686 was built in 1949 by Fairfield Bridge & Engineering of Chepstow for Esso. A Class B tank could be used for any form of oil except petrol, and this example has a 4,000 gallon capacity, equating to a 20 ton load with a 35 ton gross laden weight.[1][2]

While in service with Esso, the wagon received a registration number GWRGreat Western Railway 7704.[3]

2686 was donated to the SVRSevern Valley Railway by Esso. It was overhauled and repainted in their black and white livery by Esso's Chesterfield Works, before being delivered to Bewdley on 31 August 1971.[4]

An early use for 2686 was to supply water for 686 The Lady Armaghdale during the filming of The Incredible Robert Baldick at various locations along the SVRSevern Valley Railway in 1972. It has been also been used since for water storage for other purposes, including firefighting.[1]