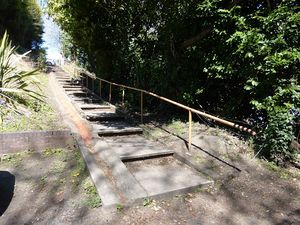 The ‘Donkey Gallop(s)’ is the nickname of the irregular flight of steps leading from the Bridgnorth Station car park near 'The Railwayman’s Arms' down to the Engine Shed Underpass.

The “Civil Engineering and Building Department” was formed in 1985 and managed by John Garrad. At the first meeting on 13 July, seven members of the team travelled to Bridgnorth and decided that the Donkey Gallop would be a suitable small first project for the new Department.[1] The Gallop was designed by Cedric Jameson and built by Neil Butler, Stephen Baker and Paul Wakelam, with £750 being spent on the materials. The completed Gallop was pictured in SVR News in Autumn 1987.[2]

The Gallop was closed between November 2016 and December 2018 while work took place on the first phase of the Bridgnorth Development Project. During that time enquiries from the public showed that the steps and footbridge outside Bridgnorth Station are used as a route by local residents from Oldbury Road to High Town. During the closure volunteers prepared the former disabled toilet/ shower room at the north end of the original station building to accept electric/gas/telecoms services that were bought up the Donkey Gallop.[3]

Original features shown on a GWR plan of the site included lighting columns along the path to illuminate the steps along with spear top gates at the top and bottom. When the originals were removed is unknown but the Development plans envisage replacing these features.[4]