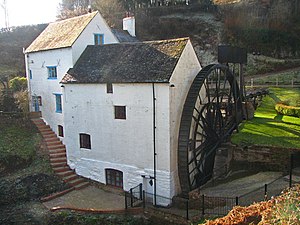 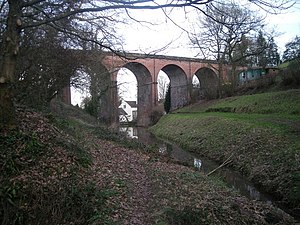 Daniel's Mill, seen through the arches of Oldbury Viaduct

Daniels Mill is a watermill visible from the train as it crosses Oldbury Viaduct.

Its source of water is a mile-long stream from the Potseething Spring to the River Severn.[1] The earliest reference to a mill on the site dates back to the late 15th century. The buildings were substantially altered and enlarged during the 17th and 18th centuries. The present mill wheel on the north side is 39ft in diameter and was made in c. 1855 by The Coalbrookdale Company. It is made of both of cast and wrought-iron and drives three pairs of stones. It is perhaps the last of its type to have survived and is the largest waterwheel powering a corn mill still working in England today.[2] Although often referred to as Daniel's Mill its website and charity title omit the apostrophe.

The mill has been restored to working condition, and is open to the public. It has remained in family ownership for 300 years and Alan George, the owner, has been a supporter of the SVRSevern Valley Railway since its early days. It is operated by the Daniels Mill Trust, Charity No. 1123673, whose aim is to maintain and preserve the water mill for the public education & benefit.[3]

Daniels Mill was damaged during the 2007 storms.[4]