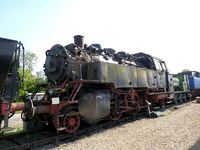 Number 305 was purchased for use on the SVRSevern Valley Railway by the ‘German 064 Klasse Fund’ in September 1974, and moved from Weiden depot near the Czech border to Stolberg. In June 1975 a move to Zebrugge took place, with the locomotive being shipped by sea to Harwich. The locomotive finally arrived at the SVRSevern Valley Railway several weeks later on 16 July 1975, after a delay in finding a suitable road route for the final part of the journey.