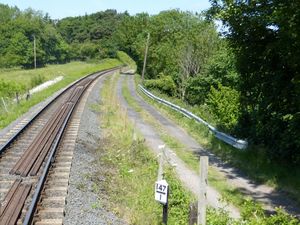 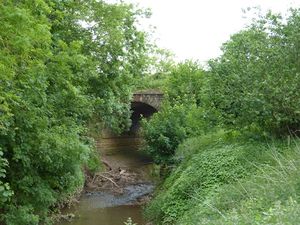 Bridge 25 is a large culvert located between Sterns Cottage and Hay Bridge at milepost 147¼. The culvert is not readily noticeable from track level (it runs beneath the barrier on the right of the first photograph). Mor Brook feeds into the River Severn near Sterns.

One of the tasks that was necessary for the granting of a Light Railway Order to reopen the line in 1970 was preparing a detailed list of all the structures such as bridges and culverts. Although the preservationists had walked the line on most weekends during the previous two years, this culvert was so overgrown with trees, ivy and undergrowth that despite its size it had gone undiscovered, appearing to be part of the embankment. It was only revealed after the working party wondered where the brook went and scrambled down the embankment to find it.[1]

The small field to the west of the line is regularly used as a photographic location for northbound trains.

The culvert appears in the SVR's From The Window publication.