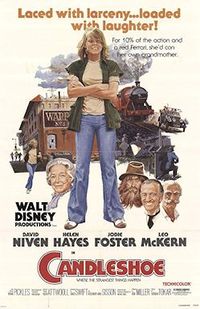 Film poster for Candleshoe
Candleshoe was a 1977 Walt Disney Productions live action family film starring David Niven, Helen Hayes, Jodie Foster and Leo McKern. The film was based on the Michael Innes novel 'Christmas at Candleshoe'.[1] The film's plot involved a picture being hidden aboard a train, which is chased by a vintage 1924 Rolls Royce chauffeured by David Niven.

Filming on the SVR took place in October 1976, using GWR Small Prairie 4566 and three GWR carriages. In the final chase scene, 4566 is seen leaving ‘Hambleden’ (Arley), crossing Hay Bridge, passing Eardington Road Bridge and crossing Victoria Bridge before arriving at Waterworks Crossing where Niven's character parks the Rolls Royce on the crossing and flags the engine to a stop. An excerpt featuring this scene may be seen on YouTube.

The day of filming which ended at Waterworks Crossing was the subject of an article by Brian Moone in SVR News 43. All the shots in the film featured the ‘real’ 4566 apart from the final shot of David Niven being sandwiched between the locomotive’s buffers and the car, for which a wooden mock-up of the front of 4566 was used. Graham Nangreave and Roger Scanlon were the driver and fireman on the day; SVR members Tom McGee and Gilbert Cooke appeared in those roles as ‘extras’ while other SVR members including Syd Anderson and Columb Howell were also featured.[2]