Burlish Branch Junction appears in the Engineer's Line References for the Severn Valley Railway. The junction with the Severn Valley branch was situated 3 chains (66 yards) west of Stourport station, towards Bewdley in the direction of travel. The ELRs record the Burlish Branch as a 'dead end' line with a length of 42 chains, placing the northern end at the terminus of the Steatite & Porcelain Products private siding, adjacent to Burlish Halt. 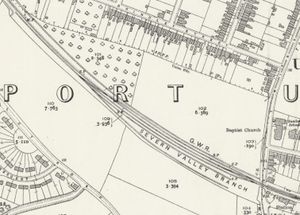 1927 OS Map of the sidings west of Stourport

From opening in 1862, the goods sidings at Stourport were originally situated east of the station. On 11 April 1913 the GWR authorised the construction of further sidings west of the station.[1] OS Maps after that time suggest these were accessed from the south only, with no north-facing connection at the north end. The two southernmost sidings faced the station and appear to have been accessed via a long head-shunt.

Extension to create the Burlish Branch 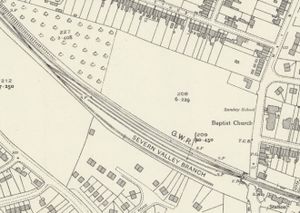 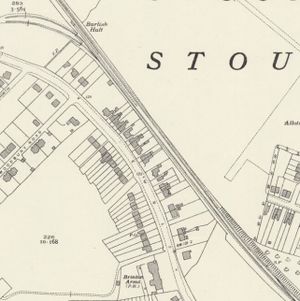 By 1939 the siding had become a long goods loop, access to the north end of which was controlled by the Park Sidings ground frame.[2][3] An extension to the original head-shunt had become a private siding for the company Steatite & Porcelain Products Ltd.
By 1960 this loop was described as "the former independent line to the Steatite Company's private siding" and was available as storage accommodation for up to 39 wagons with the adjacent loop furthest from the running line able to hold 45 wagons.[2]
The Park Sidings were used for excursion trains with "...portable steps being provided to enable passengers to enter the trains, the steps being moved by the staff from compartment to compartment, as required by the progress of the loading." When backing an empty train in to pick up passengers, staff were instructed to "...warn all persons to stand clear...and...prevent any attempt on the part of the passengers to enter the moving vehicles".[2]

Steatite and Porcelain Products Company's premises opened in 1929 and were (and are) situated in the vicinity of Burlish Halt, which opened in 1930 principally to serve the works.

A 1937 report by the GWR Traffic Research Committee states that in the three months ending November 1936, Steatite & Porcelain Products had sent 422 tons by rail, 152 tons by road and 6 tons by canal.[5]