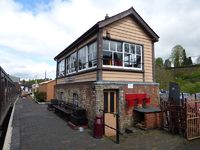 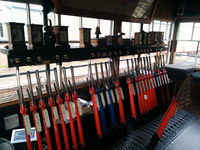 Bridgnorth has had a number of signal boxes during its existence. Initially construction of two boxes was authorised in 1891 and these were brought into use in October 1892. Bridgnorth North signal box was situated north of the station on the Down side, where the two lines converged into the single line. The foundations can still be made out on the embankment side. Bridgnorth South Signal Box was at the south end of the station on the Up side, opposite Pan Pudding Hill where it could control access to the goods yard[1]. A photo of the latter box circa 1900 appears in SVR news edition 44. In 1923 both boxes were replaced by a large single central signal box[2]. It was far larger than Bridgnorth Station layout really required with many spaces in the lever frame. This was future-proofing for alterations required for the planned line to Wolverhampton that was never constructed. This was closed by BR on 2 December 1963, and the upper structure was demolished in 1965 just before the arrival of the SVR Society[3].

The masonry base of the former central signal box was originally slightly longer than it is today. Evidence of this truncation may be found by inspection of the brickwork towards the northern end on the front wall. The upper timber section was replaced by an ill-fitting box originally built in 1925 which was relocated from Pensnett in December 1968 and erected during the following year. The frame originated from Windmill End Junction signal box[4], with parts of the interlocking and signalling instruments taken from Arley signal box, which would later require that box in turn to be re-equipped when the SVR extended southwards[5].

Repairs and refurbishment in preservation

Signalling diagram in Bridgnorth as of October 2015.

All signals at Bridgnorth are of late GWR/BR(W) steel tubular post and enamel arm design. Signal 1, the Down Home, is motor worked.

No firm plans have been made, but consideration has been given to replacing the current Bridgnorth signal box. Its location is inconvenient for modern operations and also takes up space adjacent to the station that may better be used in one way or another to deal with the high flow of passengers the station now sees. A new signal box would likely be located on the opposite side of the line at the station throat, between the bracket carrying Nos.23 and 15 signals and the Cleobury Road Bridge. This would enable quicker token exchanges with incoming and outgoing trains, and the signalman would be able to see the tail lamp of all arriving trains rather than requiring affirmation of the train's complete state from the crew. The signalman would also be able to see most of the signals within the box's control rather than requiring their being repeated by block shelf instruments. Heavy resignalling would not be necessary, although the opportunity may be taken to reconnect George's siding, currently home to four Mk1 carriages in BR(S) green and in use as staff accommodation, and make the easternmost road of the yard a through road with a connection to the running lines at the north end of platform two. If the box were to be replaced, there are no certain plans on what would happen to the current box. Demolition, retention as a visitor attraction or reuse of the box for another purpose are all possibilities.