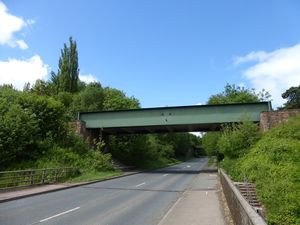 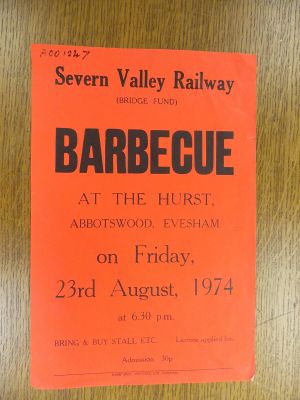 Bridge 35, Bridgnorth Bypass Bridge was built during the winter of 1982-83 as part of the construction of the Bridgnorth bypass. The proposed bypass had always been a source of concern to SVR, as its construction would remove the embankment south of Bridgnorth Station, severing it from the rest of the line.

Shropshire County Council had first announced plans for a bypass at Bridgnorth in around 1937, although by the 1960s no decision had been reached. In response to BR’s application on 1 February 1968 for the first Light Railway Order, the Council objected on the grounds that it would add a further £60,000 to the cost of the bypass, were they to build it (for context, the SVR were negotiating with BR to buy the first section of the line for £25,000 at the time). As the result of pressure from the Minister of Transport in June 1969, the Severn Valley Railway Company was advised to enter into an agreement with Shropshire County Council so that if and when the proposed bypass was authorised by the Department of the Environment, the SVR would dedicate the necessary land required by the Council to build the road, and thus sever the permanent way south of Bridgnorth. The SVR would then have to build, at its own expense, a very substantial bridge to maintain the rail link to Bridgnorth. The Agreement was dated 25 February 1970,[1] following which the SVR opened in May 1970.

The prospectus for the floatation of SVR(H) issued on 11 April 1972 proposed a further issue of shares to fund the bypass bridge, "provided that these proposals were not impracticable, i.e. not too expensive". However by late 1972, with the bypass becoming a realistic prospect, concerns were mounting that Sir Gerald Nabarro could use this as a reason to abandon Bridgnorth. At the Guarantee Company Annual General Meeting on 3 November 1972, a resolution was unanimously passed that no final decision should be made on the provision of the bypass bridge without the prior approval of the Guarantee Company (as holder of 26 per cent of the issued share capital of the Holdings Company, which owned the line and which would have to raise the money to build a bridge over the new bypass).

The Compulsory Purchase Order procedure commenced on 7 April 1973.[2] An EGM of the Guarantee Company was duly held on 18 May 1973, with around 300 members who attended being asked if the Company should raise the money to build the bridge or abandon Bridgnorth. The decision was taken, with only one vote against, to build the bridge.[3]

From reopening of the SVR in 1970, a proportion of fare revenue had been set aside in a dedicated trust fund to pay for the construction of this bridge.[4] Further fund raising initiatives began following the EGM, while in 1974 an SVRA raffle raised around £800 nett.[5]

After some considerable delay, the SVR was informed by the County Council in early 1982 that the bypass was 'all systems go' and that the SVR would be required to fulfil their part of the Agreement and build the necessary bridge to carry the line over it. However an amicable agreement was reached between the SVR and Shropshire County Council, with the Council agreeing to make a substantial contribution towards the cost of the bridge[6].

For the construction of the bridge, the SVR acted as the agent of the County Council. Consulting Civil Engineers, Edwards and Blackie, were responsible for the design of the bridge and a local firm of contractors, Jeavons, were appointed to carry out the actual construction of all but the steelwork. The fabrication of the steelwork was by Rubery Owen Steelwork. The bridge consists of two steel girders 76ft in length resting on concrete abutments, carried in turn on piles driven deep into the sandstone bedrock. The bridge has a concrete deck, cast in situ, rather than the normal longitudinal timbers used elsewhere on the line, allowing the track to be sleepered as normal on a ballasted base.

Preparatory work was carried out in autumn 1982, with the track being lifted on the morning of 1 November and excavation beginning the same day.[6] By Christmas, the concrete abutments and anchor blocks were completed and the embankments back-filled around them. The steelwork was delivered in the first week of 1983 and installed during January. The concrete pour took place on 9 February, with track being re-laid on 27 February. The first vehicle over the bridge was the 6-ton steam crane, while the following morning the "Red Ruston" became the first diesel locomotive to cross. 43106, 80079 and 4930 returned from main line duties at Hereford on the same day and became the first steam locomotives to cross the new bridge.[7]

The bridge was completed in time for the line to re-open for the 1983 season. However construction of the bypass required lowering the B4555 Highley road to pass underneath it, and consequently increasing the height of the railway embankment. Less than two months later, the embankment collapsed a few yards beyond the bridge (the area on the left of the photo below). Shropshire County Council and the SVR worked jointly for 14 hours a day seven days a week to reopen the line three weeks later.

Maintenance and repainting of the bridge was planned for, but deferred following the severe 2007 Storm Damage to the line. It was mechanically prepared and repainted using a moss green high specification paint, with a contribution of £30,000 in 2017 from Severn Valley Railway Charitable Trust Ltd.[8] It displays the SVR logo.