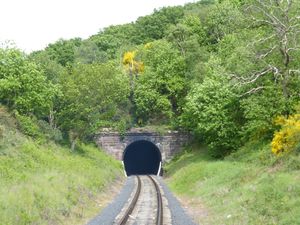 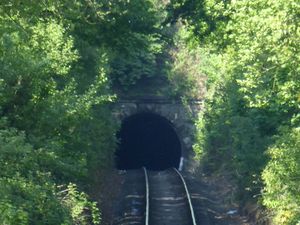 Bewdley tunnel ("Bridge" 6) is 480 yards long and is situated on the Acceptance Lever worked single line section between Kidderminster and Bewdley.

The tunnel was built by the GWRGreat Western Railway in 1876-77 as part of the Kidderminster Loop Line, the specification for which required it only to be of single track width. As built, the tunnel was lined with red brick and was 19ft wide. In 1876 two workmen were killed and two seriously injured during its construction.[1]

Unfortunately the sandstone through which the tunnel passes deteriorates on contact with air, and within 10 years part of the arch had given way under the weight of sand. Over the next 20 years, further small sections of the tunnel were relined, but in 1908 the decision was taken for the tunnel to be fully relined with two rings of blue bricks set in cement. The work began on 12 June 1910 and was completed on 20 October 1910.[2] For safety, an occupation instrument was installed at the Bewdley end of the tunnel, linked to the Kidderminster Junction and Bewdley South signal boxes. After the last train of the day had cleared the section, withdrawal of the occupation key would prevent the release of the electric train staff at either end until work in the tunnel had been completed overnight and the occupation key replaced.[3]

While the tunnel was still owned and managed by BRBritish Rail or British Railways, the SVRSevern Valley Railway in preservation had made use of it for rolling stock movements via the main line connection at Kidderminster ever since the first rolling stock arrived in 1967. The tunnel became SVRSevern Valley Railway property at the end of 1972 as part of purchase of the southern section of the line between Alveley Sidings and Foley Park. After that time the boundary with BRBritish Rail or British Railways's property was adjacent to Stourport Road Bridge, a short way north of the tunnel. Use of the tunnel for rolling stock movements continued as before.

The track through the tunnel was replaced as part of a major refurbishment during the winter of 2011-12. In order to simplify future maintenance the existing jointed track was replaced by continuously welded rail (CWR), resulting in the absence of the traditional 'clickety-click' from the wheels as the train passes through the tunnel.