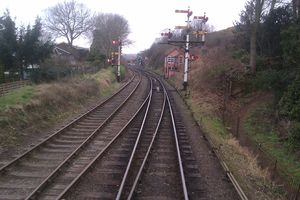 Bewdley MPD is home to the Class 108 DMU. Other operational locomotives are also stabled at Bewdley, running light engine to Kidderminster at the start and end of each day as required. On certain Gala days a DMUDiesel Multiple Unit shuttle service is operated between Stourport Triangle, Bewdley and the short remaining length of former Tenbury Branch track immediately north of Bewdley to recreate the feel of a country junction station.

On 8 August 1988 Severn Valley Railway (Holdings) PLC gave a Legal Charge in favour of the County Council of Hereford & Worcester in respect of "All that land at Bewdley containing six point seven acres or thereabouts together with the buildings erected thereon." The charge was given as security against "All monies due or to become due from the company to the chargee under the terms of agreement dated 10.5.88." As of 2019[update] its status was shown as 'Outstanding'.[1] The Council itself was abolished in 1998 and reverted to the two separate historic counties of Herefordshire and Worcestershire.

In March 2018 the buffet adjacent to Platform 1 (but not the more recent toilet block and kitchen) was closed pending demolition of the buffet building, which took place from 16-19 July. BR 4593 Tourist Standard Open was moved to the dock in front of the buffet to be used as seating for staff and the public, with table service provided from the kitchen.

The booking hall had been ‘modernised’ by BRBritish Rail or British Railways with tall ticket windows and plywood facing. The plywood was removed in winter 1980-81 to reveal the original GWRGreat Western Railway panelling. At the same time the smaller windows were reinstated and fitted with brass wired grids acquired from the old Birmingham Snow Hill station. The balustrades in front of the windows also came from Snow Hill[2].

The box is Grade II listed by Historic England and described as "Intact but not on original site".[4] It arrived on the SVRSevern Valley Railway in winter 1981-82 on permanent loan from the Ironbridge Gorge Museum Trust[5] and was originally situated on Platform 1.[6].

Two water towers at the southern end of Platforms 2&3 and in the MPDMotive Power Depot area allow watering of locomotives. The tower on the island platform is of GWRGreat Western Railway origin and was recovered from Stow Heath yard, Bilston in 1969. The tower next to the MPDMotive Power Depot is of LNWRLondon & North Western Railway origin and was retrieved from Hadley, near Wellington, in October 1972[7]. Both columns were installed during the winter of 1973-74[8]. Unlike at Bridgnorth and Kidderminster, the water supply at Bewdley is not specially treated, and so the columns are only used on rare occasions such as galas.

The double-faced clock under the island platform canopy was built for the GWRGreat Western Railway by Kays of Worcester in the late 19th or early 20th century. It was used at nearby Stourbridge Junction until 1977 when, no longer required by BRBritish Rail or British Railways, it was acquired by staff from Arley station. It worked until 1998, but then underwent a year-long overhaul, being re-commissioned on 10 April 1999[9].

The token catcher opposite Bewdley North signal box was originally located opposite Bewdley South signal box, where it could be used by locomotives on the former Stourport Branch. It was moved to its present location during the 1974-75 close season[10]. It is not currently in use, tokens instead being exchanged by hand.