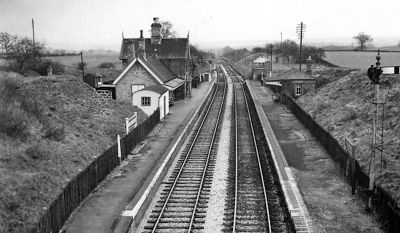 Berrington was the first station south of Shrewsbury on the original Severn Valley line, located at milepost 168m 12c, 36½ miles from Hartlebury and 4¼ miles from Shrewsbury. The village of Berrington itself lay around half a mile to the south west, with the station being closer to the village of Cross Houses to the north east. The latter village stood on the main Shrewsbury to Much Wenlock turnpike and was also home to the Atcham Union Workhouse. At opening in 1862 the local population was just 772, including the 'inmates' of the Workhouse. The Workhouse was enlarged in 1871 to take up to 550 'inmates' and by 1900 the local population had increased to 968[1].

On 2 January 1860, during the construction of the SVR, a youth named James Painting died from injuries received after he was run over by some railway wagons near Berrington.[2]

At opening on 1 February 1862, Berrington had a single platform and siding, with the station building on the east (Cross Houses) side of the line. On 14 June 1893 the GWR authorised the construction of a passing loop with a second platform which became the Down platform. This platform was provided with a platform shelter. The Up platform was also extended, and a signal box and more significant sidings provided. The authorised cost of this work was £1,068. A year later on 14 June 1894 the work was approved by the Board of Trade inspector, Major Yorke, although he required a ladies’ waiting room and WC to be provided on the Up platform. The GWR approved the construction of this at a cost of £240 on 8 August 1894.[3][1]

A level crossing with a crossing keeper's cottage, now demolished, was situated a short distance down the line to the south east. To the north west, around two miles nearer Shrewsbury at 33m 30c, the Branch reached its summit level of 217 feet[4].

GWR staff records for 1922 show the station had a staff of 6.

On 2 February 1963 the goods yard was closed by BR.[5] The station itself closed on 9 September 1963, when passenger services between Bewdley and Shrewsbury were withdrawn by BR. Through freight services continued until 30 November of that year, after which the signal box was taken out of use on 2 December 1963.

The line through Berrington was maintained in working order for the move of boilers and other large equipment to Ironbridge power station which took place on 22 April 1966, after which time the line south of Berrington was completely closed and the track lifted.[6] The section of track between Berrington and Shrewsbury continued in use for testing Sentinel diesels until finally being closed by BR on 21 January 1968.[7]

The station is now a private residence and small business.[8]

In common with all stations on the Severn Valley Railway throughout that time, revenue from freight exceeded that from passenger services. The fall in the number of tickets sold between 1903 and 1938 was proportionately greater at Berrington than any other station on the Branch.[9] During World War I Atcham Union Workhouse became Berrington War Hospital, later becoming successively a general hospital, maternity hospital and geriatric hospital after that war,[10] which may have contributed to the decline in demand.