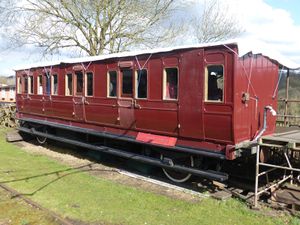 BarryWoodham Brothers Scrapyard, Barry, South Wales. The source of many locomotives now in preservation. Railway Carriage Trust was formed in 2009 to restore and operate former Barry Railway Carriage 163 on the Severn Valley Railway. 163 itself was rescued in 1992 and was in private ownership before its transfer to the newly-formed Trust.

The Trust is located at Hampton Loade station, where they have a sales van and workshop base.

Until 2018 it was a membership body by subscription. It then became a supporters' organisation with no membership, due to the membership secretary departing for other projects and no replacement being forthcoming.[1] It publishes an annual newsletter 'The BarryWoodham Brothers Scrapyard, Barry, South Wales. The source of many locomotives now in preservation. Octopus'. The Trust is "working towards the aim of becoming a Charity and have made several steps towards this goal."

With volunteers' progress hampered by working in the open air, plus the Covid lockdowns and other imposed restrictions, progress slowed. Consequently, with restoration work needing to be re-done as well as the ongoing restoration still to progress, limited potential usage on the SVRSevern Valley Railway and no undercover storage, in 2022 the Trust and Railway agreed that 163 will leave the Railway. The trustees intend either the team continues restoring the coach on another nearby site, or the vehicle is transferred to a new owner with similar aims and for restoration work to continue[2].