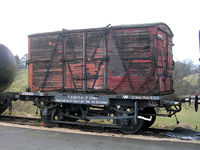 These "Type B" General Goods Containers were designed to be carried by 'ConflatGWR telegraphic code signifying a flat wagon for containers' Wagons such as GWR 39860, on which Container 49408B is shown in the photograph. The containers are commonly used as storage units.

The Railway Heritage Register Wagon Survey gives details of three such containers at the SVRSevern Valley Railway. 49405 and 49408 were built at the Glasgow St Rollox Works in 1958. 55730 was built at Swindon in 1956.