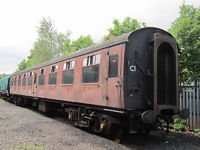 25771 arrived on the SVRSevern Valley Railway in September 1986 from London’s Old Oak Common, courtesy of the 75069 Fund. It was formerly part of the BRBritish Rail or British Railways Maroon running set but has spent some time in Kidderminster Carriage Works, having been photographed there in 2007 for the Railway Heritage Register Carriage Survey and in May 2015 on Facebook.