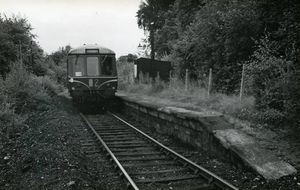 Alveley Halt was a private halt situated between Highley and Hampton Loade, used by miners at Alveley Colliery.

Alveley Halt opened around February 1944[1] (Alveley Sidings opened in 1939 and some sources date the halt to this time). The Halt was primarily for the use of miners at Alveley Colliery. Certain trains would stop at the halt to coincide with shifts; these were shown in BR working timetables although the Halt did not appear in public timetables.

The Halt was situated near the present Country Park Halt, somewhat closer to Highley Station. The platform was of simple construction consisting of a wall of breeze blocks topped by coping stones with an ash surface. A pedestrian level crossing was situated next to the Halt, beyond the DMU in the Sellick Photograph.

The Halt was referred to as an 'N.C.B. Private Halt' in the BR Public Notice of closure which listed the stations and halts to be closed from Monday 9 September 1963.

In summer 1973, during preparations for the 1974 re-opening of the line between Hampton Loade and Bewdley, the platform face was found to be collapsing towards the line, so the halt was demolished[2]. The location of the halt can just be made out as a grass covered piece of raised rough ground immediately adjacent to the still-extant track crossing, on the western side of the line. A piece of GWR bridge rail, presumably originally a post for a sign, still stands vertically here.