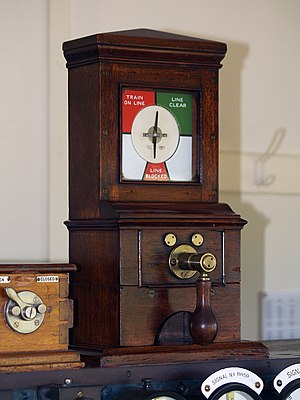 Absolute Block is a method of signalling for controlling the passage of trains over a double track railway. The presence of two lines allows two trains to proceed in different directions at the same time. Trains usually travel on the left hand side, similarly to how cars always drive on the left in the UK. Each track is identified by its normal direction of traffic, with the two directions being named "Up" and "Down", with "Up" generally being defined as the line leading towards the principal terminus, normally London. The Absolute Block system ensures that only one train may be in a section on each track at any given time.

Unlike working on single lines, where trains can proceed in either direction, each of the two lines in Absolute Block works in one direction only. Each line is divided into defined ‘block sections’, and there may only be one train in each section at a time. A train approaching a section is offered by a signalman to his counterpart at the next signal box. If the section is clear, the latter will accept the train, which will allow the first signalman to clear his signals to give permission for the train to enter the section. This communication normally takes place by bell codes and status indications are transmitted between signalmen using a device called a block instrument. Another train cannot then be accepted until the first train has cleared the section. This process is repeated for every block section a train passes through.

Before the introduction of block systems, the time interval system was used to maintain separation between trains. A following train would be allowed to depart after a specified time interval, on the assumption that both would proceed at a similar speed. This meant that should the first train come to a stand, there was no absolute safeguard to prevent a rear end collision other than the vigilance of the engine crew. Use of the Absolute Block system was made mandatory on passenger-carrying lines in 1889[1].

Absolute Block on the Severn Valley

The only section of the current SVR controlled this way is the main lines between Bewdley North and Bewdley South signal boxes. The original Severn Valley Railway was built as a single track railway, and was mainly worked using tokens, although short sections of double track at stations such as Stourport were worked using Absolute Block.