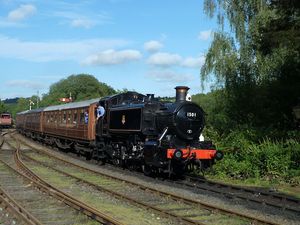 The 15XX Pannier Tank Fund was formed in 1969 by members of the Warwickshire Railway Society and the Severn Valley Railway Company in order to purchase and preserve GWR Pannier 1501.[1]

In 1972 it reformed as the 15XX Pannier Tank Trust, with three elected trustees and two nominated by the Warwickshire Railway Society. 1501 was first steamed on 29 May 1997 "thanks to the dedicated efforts of a small team of 15XX Pannier Tank Fund members, backed by the financial efforts of the Warwickshire Railway Society".[2]

In January 2006 the Trust was in turn transformed, this time into a Charity and re-named '1501 Pannier Tank Association', Registered Charity number 1134477.[3] Its activities are to "To provide support and financial assistance for the preservation of steam locomotive 1501."[4] The Association is based at Bewdley and is run by a team of around seven Trustees who are elected annually at an AGM (usually held in August at Bewdley). It offers membership to the public in return for a minimum donation.